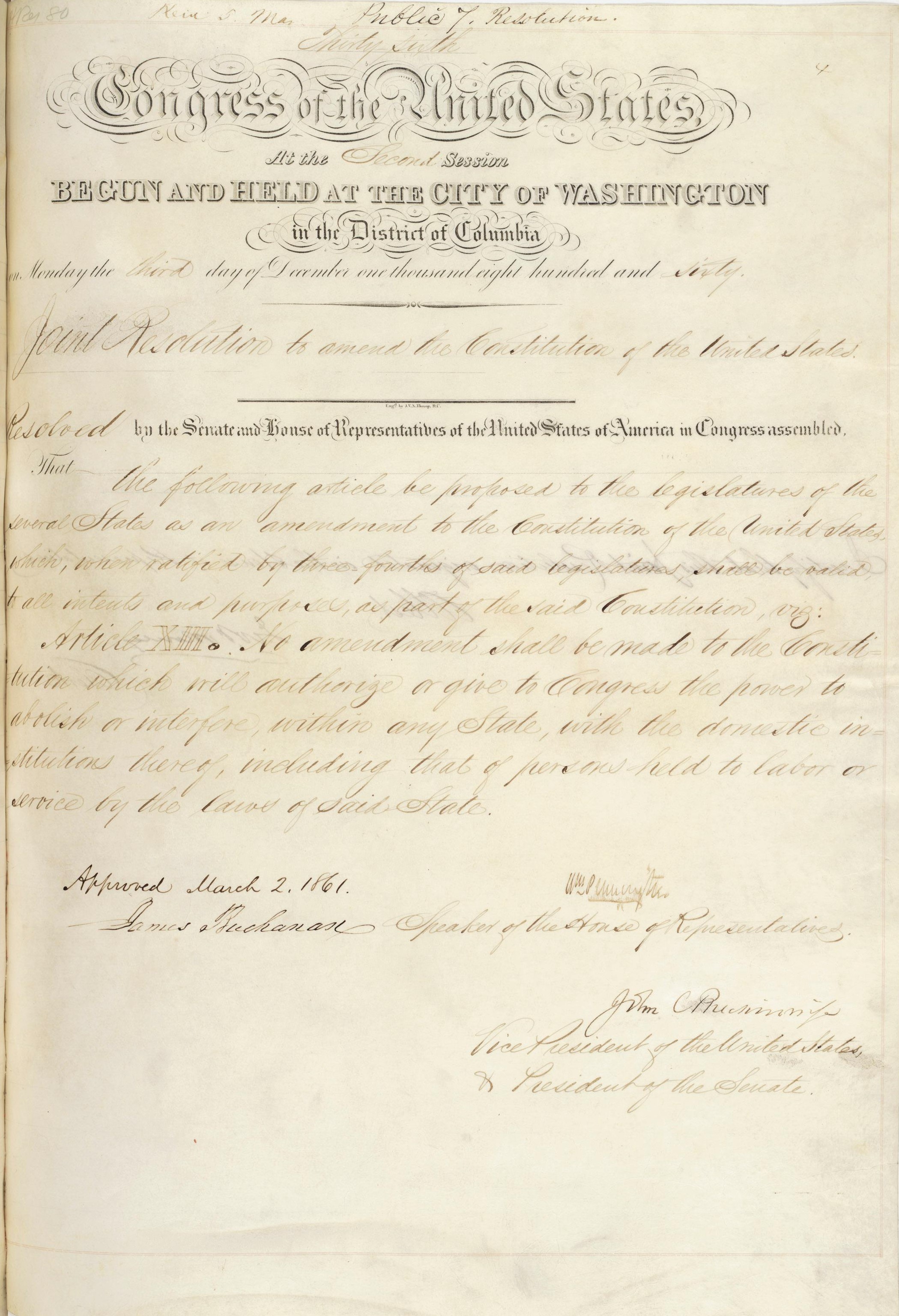 The Corwin Amendment, also called the “Slavery Amendment,” was a constitutional amendment passed by Congress in 1861 but never ratified by the states that would have banned the federal government from abolishing the institution of slavery in the states where it existed at the time. Considering it a last-ditch effort to prevent the looming Civil War, supporters of the Corwin Amendment hoped it would prevent the southern states that had not already done so from seceding from the Union. Ironically, Abraham Lincoln did not oppose the measure.

The Text of the Corwin Amendment

The operative section of the Corwin Amendment states:

“No amendment shall be made to the Constitution which will authorize or give to Congress the power to abolish or interfere, within any State, with the domestic institutions thereof, including that of persons held to labor or service by the laws of said State.”

In referring to enslavement as “domestic institutions” and “persons held to labor or service,” rather than by the specific word “slavery,” the amendment reflects wording in the draft of the Constitution considered by delegates to the Constitutional Convention of 1787, which referred to enslaved people as “Person held to Service.”

Legislative History of the Corwin Amendment

When Republican Abraham Lincoln, who had opposed expanding the practice of enslavement during the campaign, was elected president in 1860, the pro-slavery southern states started withdrawing from the Union. During the 16 weeks between Lincoln’s election on November 6, 1860, and his inauguration on March 4, 1861, seven states, led by South Carolina, seceded and formed the independent Confederate States of America.

While still in office until Lincoln’s inauguration, Democratic President James Buchanan declared secession to be a constitutional crisis and asked Congress to come up with a way to reassure the southern states that the incoming Republican administration under Lincoln would not outlaw enslavement.

Specifically, Buchanan asked Congress for an “explanatory amendment” to the Constitution that would clearly confirm the right of the states to allow enslavement. A three-member committee of the House of Representatives headed by Rep. Thomas Corwin of Ohio got to work on the task.

After considering and rejecting 57 draft resolutions introduced by a host of Representatives, the House approved Corwin’s version of the enslavement-protecting amendment on February 28, 1861, by a vote of 133 to 65. The Senate passed the resolution on March 2, 1861, by a vote of 24 to 12. Since proposed constitutional amendments require a two-thirds supermajority vote for passage, 132 votes were required in the House and 24 votes in the Senate. Having already announced their intent to secede from the Union, representatives of the seven pro-slavery states refused to vote on the resolution.

Presidential Reaction to the Corwin Amendment

Out-going President James Buchanan took the unprecedented and unnecessary step of signing the Corwin Amendment resolution. While the president has no formal role in the constitutional amendment process, and his or her signature is not required on joint resolutions as it is on most bills passed by Congress, Buchanan felt his action would show his support for the amendment and help convince the southern states to ratify it.

While philosophically opposed to enslavement itself, President-elect Abraham Lincoln, still hoping to avert war, did not object to the Corwin Amendment. Stopping short of actually endorsing it, Lincoln, in his first inaugural address on March 4, 1861, said of the amendment:

“I understand a proposed amendment to the Constitution—which amendment, however, I have not seen—has passed Congress, to the effect that the Federal Government shall never interfere with the domestic institutions of the States, including that of persons held to service … holding such a provision to now be implied constitutional law, I have no objection to its being made express and irrevocable.”

Just weeks before the outbreak of the Civil War, Lincoln transmitted the proposed

amendment to the governors of each state along with a letter noting that former-President Buchanan had signed it.

Why Lincoln Did Not Oppose the Corwin Amendment

As a member of the Whig Party, Rep. Corwin had crafted his amendment to reflect his party’s opinion that the Constitution did not grant the U.S. Congress the power to interfere with enslavement in the states where it already existed. Known at the time as the “Federal Consensus,” this opinion was shared by both radicals in favor of and abolitionists opposed to enslavement.

Like most Republicans, Abraham Lincoln (a former Whig himself) agreed that in most circumstances, the federal government lacked the power to abolish enslavement in a state. In fact, Lincoln’s 1860 Republican Party platform had endorsed this doctrine.

In a famous 1862 letter to Horace Greeley, Lincoln explained the reasons for his action and his long-held feelings on enslavement and equality.

“My paramount object in this struggle is to save the Union, and is not either to save or to destroy slavery. If I could save the Union without freeing any slave I would do it, and if I could save it by freeing all the slaves I would do it; and if I could save it by freeing some and leaving others alone I would also do that. What I do about slavery, and the colored race, I do because I believe it helps to save the Union; and what I forbear, I forbear because I do not believe it would help to save the Union. I shall do less whenever I shall believe what I am doing hurts the cause, and I shall do more whenever I shall believe doing more will help the cause. I shall try to correct errors when shown to be errors; and I shall adopt new views so fast as they shall appear to be true views.
“I have here stated my purpose according to my view of official duty; and I intend no modification of my oft-expressed personal wish that all men everywhere could be free.”(http://www.abrahamlincolnonline.org/lincoln/speeches/greeley.htm)

The Corwin Amendment resolution called for the amendment to be submitted to the state legislatures and to be made a part of the Constitution “when ratified by three-fourths of said Legislatures.”

In addition, the resolution placed no time limit on the ratification process. As a result, the state legislatures could still vote on its ratification today. In fact, as recently as 1963, over a century after it was submitted to the states, the legislature of Texas considered, but never voted on a resolution to ratify the Corwin Amendment. The Texas legislature’s action was considered a statement in support of states’ rights, rather than slavery.

As it stands today, only three states (Kentucky, Rhode Island, and Illinois) have ratified the Corwin Amendment. While the states of Ohio and Maryland initially ratified it in 1861 and 1862 respectively, they subsequently rescinded their actions in 1864 and 2014.

Interestingly, had it been ratified before the end of the Civil War and Lincoln’s Emancipation Proclamation of 1863, the Corwin Amendment protecting enslavement would have become the 13th Amendment, instead of the existing 13th Amendment that abolished it.

Why the Corwin Amendment Failed

In the tragic end, the Corwin Amendment’s promise to protect enslavement neither persuaded the southern states to remain in the Union or to prevent the Civil War. The reason for the amendment’s failure can be attributed to the simple fact that the South did not trust the North.

Lacking the constitutional power to abolish enslavement in the South, northern politicians opposed to enslavement had for years employed other means to weaken enslavement, including banning the practice in the Western territories, refusing to admit new pro-slavery states to the Union, banning enslavement in Washington, D.C., and, similarly to today’s sanctuary city laws, protecting freedom seekers from extradition back to the South.

For this reason, southerners had come to place little value in the federal government’s vows not to abolish enslavement in their states and so considered the Corwin Amendment to be little more than another promise waiting to be broken.